For Day 4 of my 10 Days of Thankfulness, I would like to express how thankful I am for the Buckleys. If you’ve been following me since I moved to Africa, you know that I work with Light of the World Ministries which was founded by Matt and Kristin Buckley over 25 years ago.

When they first came to Botswana, they were only 21 and 22 years old and newly married – they celebrated their first wedding anniversary in Botswana! They are as much African as they are American, and they are dedicated and committed to what God has called them to do in Africa.

They have been pastors of Light of the World Church in Francistown, Botswana for over 20 years now. When they first opened the church, only 3 adults attended and about 100 children. The church now runs about 300 people of all ages. In addition to that, two branch churches have also been established in nearby villages.

In 1999, they opened Light of the World Academy, a Christian preschool that has earned a reputation in the community as one of the best English-medium preschools in Francistown.

In 2000, they opened Light of the World Bible Training Centre with a heart to teach the Bible and train leaders for ministry. People of various nationalities and religious backgrounds have attended the school.

The Buckleys have accomplished a lot over the years, but they’ve also experienced their own set of hardships. They’ve experienced financial challenges, not so great living situations, and various types of roadblocks in trying to build their ministry.

From their great and not so great experiences, they’ve developed a heart to equip and prepare future missionaries desiring to enter the mission field – to help them avoid the same mistakes they made when they were new missionaries and to help them start their missionary life off on the right foot in the most successful and effective way possible.

I came to Botswana in 2012 feeling more excited than nervous. In fact, I pretty much had zero fear – I couldn’t wait to step foot on African soil. I didn’t experience any type of culture shock when I first arrived. I had a good idea of what to expect – how I should dress, cultural expectations, etc. I also arrived fully funded for one year, and have been blessed to maintain ongoing financial support – I’ve never lacked since I’ve been on the mission field. As I mentioned in a previous post, I am serving in an area that I enjoy and am good at. When I decided to become a missionary, I was entering new and unknown territory, in the literal and figurative sense. But I felt ready and prepared, and I owe so much of that to the Buckleys and their willingness to believe in me and invest in me. They have not only helped to make me a better missionary, but they have helped me to become a better person – a better version of myself than the self who stepped off the plane onto African soil in July of 2012. I had no idea what I was doing when I decided to become a missionary, and the Buckleys helped me eliminate so many of the questions marks that were running through my head. I am so thankful that God put the right people in my path at the right time. Thank you, Buckleys, for everything! 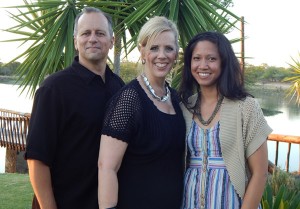